To Me, Relationships are the Key

Recently I was invited to join a panel of four at a launch for Leading Teams at the Sydney Cricket Ground. The launch was to support one of our newer facilitators, Kurt Wrigley, who is leading our operations in Sydney.

We invited guests to ask questions of the panel members and quite early on I was asked what I was most proud of in being one of the founding directors at Leading Teams. 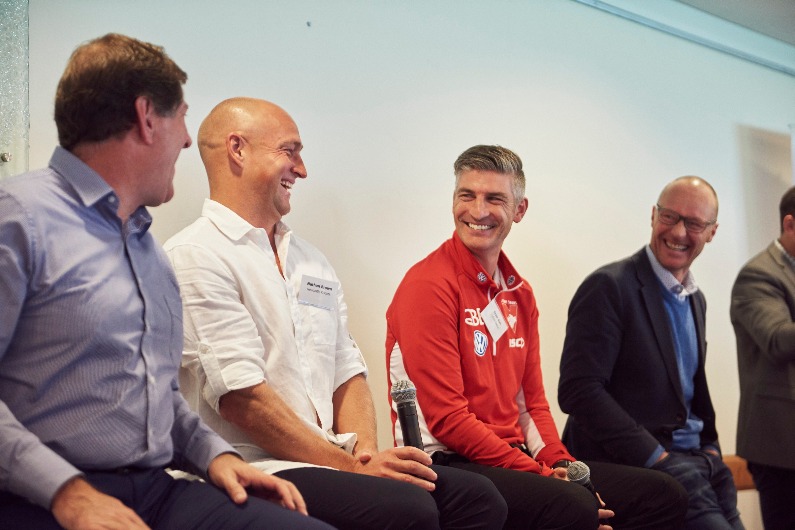 If you look at the above photograph that encapsulates my answer. I can’t believe my luck when I look back at the amazing people I have had the good fortune to work with and the longevity of these relationships.

Michael Scott, sitting far right, was a young executive at Nike in 2006 when we caught up for a coffee to talk about the possibility of running our program for the executive team at Nike. We ended up completing the program with the exec team and other teams at Nike but then followed Michael as his career moved forward with Virgin and Myer.

I met Brett Kirk (second right) in 2003 as a young man trying to establish himself as a player at the Sydney Swans. My relationship with Brett continued as he became a revered player, a much-admired leader and now a very effective coach.

Nathan Brown (second left) invited me to a meeting in 2004 as he was going into his second season as head coach at the St George Illawarra Dragons in the NRL. I worked with Nathan for three years and then maintained contact with him as he coached Huddersfield and St Helen’s in the Super League in England. Then in 2016 Nathan was appointed the head coach of the Newcastle Knights in the NRL and our working relationship began again.

I would think the photograph goes a long way to explaining what makes me proud and humbled when it comes to my journey at Leading Teams. I can’t help thinking that if we were all invited back in another 10 years or more to take part in the panel, we would have aged but I am sure we would still laugh as much and as loud as we always have.

How to Adapt Your Leadership Style to Set Your Team Up for Success
If You Care About Your Relationship, Consider Whether it’s Time to ‘Empty the Cup’