Leading Teams marked the official launch of its Sydney operations last week with a leadership breakfast at the Sydney Cricket Ground.

All four of the panel have considerable experience of the Leading Teams program and were happy to share their experiences from both the corporate and sporting worlds.

The importance of feedback

Feedback is a fundamental element of the Leading Teams program. Michael Scott challenged the perception that giving feedback can be ‘brutal’, saying “We support the person; we challenge the behaviour.” He discussed the importance of the work Leading Teams does to create a safe environment for both giving and receiving feedback, noting the absence of humour and presence of eye contact as critical.

Brett Kirk talked about the need to include your leaders in your recruitment as you should see them as stakeholders in the culture of your team; Nathan Brown discussed how working with Ray helped some of his younger players to understand their potential for longevity in the game.

Master of Ceremonies for the day, Channel 9’s Joel Caine, used Ray McLean’s book, Any Given Team, as a reference point for a discussion on how to maintain high performance once you’ve attained it, with both Ray and Brett looking back on past Grand Final victories and losses and the lessons that can be learnt from both.

Leading Teams’ operations in Sydney are led by Kurt Wrigley, who joined us in late 2017. 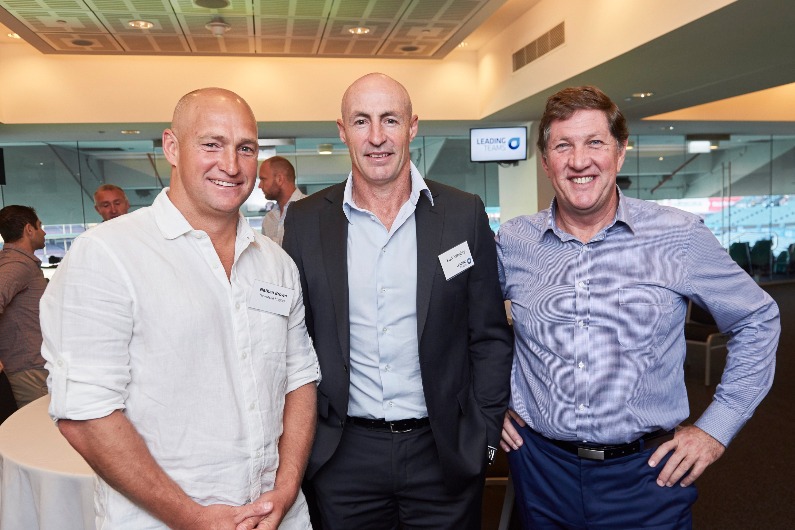 Formerly of the Newcastle Knights, Kurt experienced our programs as a coach and made the decision in 2017 that it was time for him to try being on the other side of facilitation. Leading Teams was delighted to welcome him into the team as he brings with him experience, energy and a fantastic ability to positively influence those around him. Michael Maguire, former head coach of the South Sydney Rabbitohs said of Kurt, “He’s a great leader and he’ll make a great facilitator.”

Of the day, Kurt commented: “It was fantastic to have these local leaders turn out to talk high performance. I’m so excited to be fully up and running in Sydney and I’m looking forward to working with many more high performing teams in the future.”

Leading Teams is already working with Sydney-based clients including the Sydney Swans, McGrath Estate Agents, Parramatta Eels, Tempus Wealth and NSW Business Chamber. Kurt and the team were delighted to welcome so many representatives of local businesses and teams to the launch.

If You Care About Your Relationship, Consider Whether it’s Time to ‘Empty the Cup’
Realising Your Full Potential: the Johari Window