In February 2018 I wrote an article explaining a model we use a lot at Leading Teams: the Situational Leadership Model.

To help bring it to life, I thought I would give a couple of examples of how the model is used in practice, with a particular reflection on the leader’s role in the outcome of the task.

Those of you that are familiar with elite sport will know that coaches will often spend an inordinate amount of time reviewing the game.

They re-watch every minute, dissecting all the things that worked in the game and all the areas to improve on. They will then present this to the players post-game, looking to engage the players in conversation with a focus on continuous learning.

In my playing days in the 90s to early 2000s, this was mostly handled by the coaches talking to the players and telling them what to do and not do (‘directing’ style). It has now evolved to a place where the coaches are activley engaging the players in the review and asking questions to get them thinking and learning (‘coaching’ and ‘supporting’ styles).

Increasing ownership across the team

At one of the sporting teams I worked with, we decided to give the player leadership group an opportunity to present a section of the game review. The coaches have limited contact with the players in a game, so we wanted to find ways to train the leaders and give them experience of taking ownership. The aim was that using a Delegating style during the week would increase their confidence and knowledge and enable them to feel empowered to take responsibility on game day.

We organised for two of the leaders to present first.

The coaches put together some video clips from the game and the leaders selected the ones they felt would have the most impact and would like to show the group.

Afterwards, I spoke to a couple of the coaches about how they thought it went. Their reaction was one of disappointment – they felt they would have been better delivering the messages. My instant reaction to this was to ask myself “Why didn’t it go as well as we would have liked? What role had I/we played in the perceived poor performance?”

Set people up to succeed

My first instruction to the coaches was to think back to their first time presenting to a playing group as a coach and reflect on how they had performed. On top of that I asked them to put themselves in the position of a player challenging their peers, not as a coach to a player. They agreed that this would be far more challenging.

I came back to the Situational Leadership Model. Had we set them up to succeed or fail? I had just assumed that because they had sat through countless meetings (at least five per week) that they would have the skills to present. In essence we had gone straight from an ‘I Tell’ (‘directing’) form of leadership where they were being spoken to, straight into a ‘You Decide’ (‘delegating’) style about what the meeting should look like and how to run it. We hadn’t spent any time in the ‘We Talk/I Decide’ (‘coaching’) or ‘We Talk/You Decide’ (‘supporting’) styles. 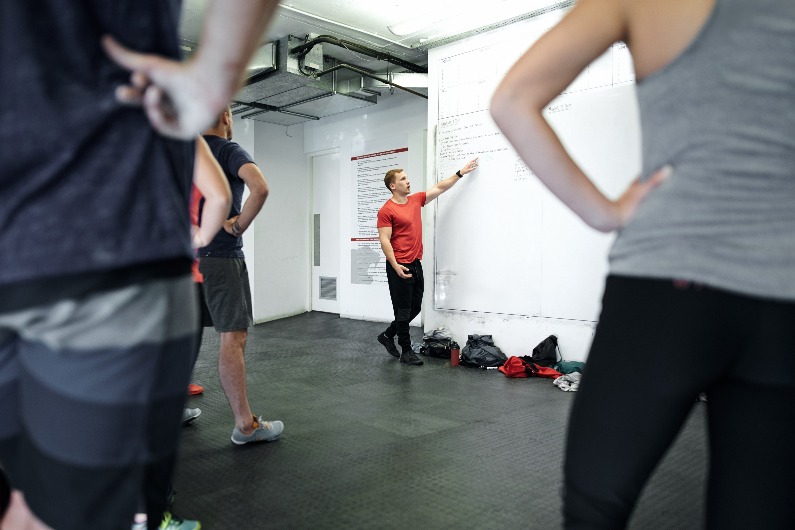 The following week we got the whole leadership group together to review the process. It was great to get the perspective of the guys that had been in the audience and ensured the review was done with the intention of everyone being able to learn from our first two presenters (who had shown great courage in being first).

Through this process the group came up with a list of key ingredients that make a great presentation. Some of these were: the way they needed to speak (tone, volume and strong language); talking to the person you are addressing, not talking to the screen; and really knowing your topic (but using notes if you needed). Here we were starting to explore the ‘coaching’ and ‘supportive’ styles of leadership.

We asked the original two presenters to do a practice run with the rest of the leadership group in their new format and once again gave them feedback on their performance. There was a considerable improvement and the group left feeling much more confident and willing to keep taking ownership of the process.

With a revised approach the leadership group continued to develop and improve and, by the end of the season had seen a significant improvement in player ownership on gameday.

It’s not just for sporting teams. Recently, working with a corporate client, one of the senior leaders was given some feedback that he needs to delegate more. He has a team of people and the other leaders felt as though he was taking far too much on himself. This was causing him to work long hours and the team were concerned about his work/life balance. In conversation he mentioned that he had once had a bad experience with delegating a task to one of his team members who had not done the task and caused him to miss a deadline. He said now that he just does it himself as then “At least I know it will get done”.

Again, an assumption was made that this person had the knowledge, skills and willingness to perform the task. We have since spoken about how he can adjust his leadership style to better support his team. As leaders, when handing over a task, you should have the upmost confidence in the person completing it at a level you are comfortable with because of the training you have invested in them.

This is a fundamental challenge in leading your people. Do you go straight from ‘directing’ to ‘delegating’? If you do there are some inherent risks associated with that. You might have a similar example to me or my client where the task is done poorly or not done at all and so you potentially take it back upon yourself to complete. Another potential risk is that the follower continually asks questions because they aren’t quite sure what you are after. In this case the leaders may think “It’s easier to do it myself”.

Although working through the ‘coaching’ and ‘supporting’ stages may take up some more of your time, in the long run it will save time because you can trust your people to get the job done when you’re not available. The other valuable thing along the way is you get a greater understanding of your people, build better relationships and potentially uncover some great skills or qualities you may have otherwise missed.

Leadership is about setting your teams and individuals up to succeed and if you don’t find or value the time to fully invest in them to give them the skills and confidence to achieve, are you setting them up for failure?

If one of your team members does fail, an important question you should be asking yourself is “What role did I play in this?” and “How can I help them to succeed next time?”

What Great Leaders Do
To Me, Relationships are the Key