The Sydney Swans compete in the Australian Football League (AFL). The Swans, originally based in South Melbourne were relocated to Sydney in 1982, winning their first Premiership as the Sydney Swans under the leadership of Paul Roos in 2005. The club went on to make the Grand Final again the following year only to fall short of back to back flags. John Longmire took over from Paul Roos as Head Coach of the Swans in 2011, winning the club’s second Premiership in 2012 by defeating Hawthorn in the Grand Final. Longmire continues the working relationship between the Swans and Leading Teams, which is now in its fourteenth year. 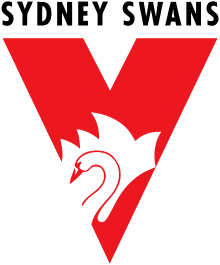 When Paul Roos was appointed to Head Coach of the Sydney Swans midway through the 2002 season, it had been 69 years since the Swans had won a Premiership. Roos set about changing the culture within the club, forming a collaboration with Leading Teams and from there, the ‘Bloods’ culture was created.

The Swans went through the Leading Teams process of developing a team Trademark, and the club’s first leadership group was established. The playing group began speaking openly about what behaviour they expected from each other, both on and off their field, in order to meet the requirements outlined in the team trademark, and which would ultimately lead to Premiership success.

Paul Roos was appointed caretaker coach of the Swans midway through the 2002 season, replacing Rodney Eade who was sacked following a string of losses. Roos was a club favourite, having played 87 games for the Swans which included a grand final defeat in 1996. He had worked under Eade as his assistant and was formally appointed to Head Coach for the 2003 season.

During his first full year in charge, Roos brought in Leading Teams Director Ray McLean to assist the Swans with leadership development and to improve the team culture. At this time, the club was undergoing a period of change, rebuilding its playing roster following the retirement of keys players the previous year, including team captain Paul Kelly, Tony Lockett, Andrew Dunkley and Wayne Schwass.

Collectively these players had 1000 games worth of experience and with a rookie coach at the helm, a new era was about to be created at the club, which was still looking for their first Premiership win as the Sydney Swans.

Early in the 2003 New Year, the players went on a pre-season training camp where they met with McLean for the first time. McLean spoke to the players about empowerment, and were encouraged to create their own team trademark. At that foundational meeting, the players wrote down a series of ideas and talked about how they wanted to be seen from the outside, and how they wanted to play and behave. This was the basis for the trademark that was created at this session and which was the beginning of what would become, in folklore terms, the ‘Bloods’ culture. The name paid tribute to the club’s South Melbourne roots, and resonated with all the players, who felt at the time that the Swans were losing the connection to its heritage.

The players spoke about notions like ‘When it’s my turn to go, I go’ and ‘Putting the team first’ and ‘Being honest with my teammates’ and ‘Giving 100 per cent effort, 100 per cent of the time’.

The themes discussed would be similar to what comes up in team meetings at other clubs; but the difference with the Swans was how they were acted out and how they were enforced.

The establishment of a club’s trademark is the easier part of the process. The genuine test is the rigour around, and the commitment to, a regular and consistent review process. The commitment shown by the Swans players to this process was relentless – whether it was feedback from coach to player, player to coach, rookie to senior player or player to captain – each member of the team was committed to providing honest and open feedback to each other that would benefit the entire team.

The first opportunity players were given to provide open and honest feedback was to decide the Leadership Group, a concept none of them had heard of before. The players wrote down the names of the five players who they believed best acted out the core values that had just been established, and the results read out in an open forum.

Ultimately, ten players formed Sydney’s first leadership group, and some of the club’s best players had not been elected. Under the Leading Teams model, players, coaches and staff were encouraged to speak openly to offer feedback, both positive and negative. This was the start of peer reviews at the club, where players would stand in front of the group and be asked to either (1) stop doing something; (2) start doing something; or (3) keep doing something.

New players to the club knew what was expected of them to meet the criteria of being a Blood, which was a set of behaviours that are explained to them quite clearly when they arrive. If they do not, they are told by their peers and expected to correct their actions. If they don’t make the necessary corrections, they do not play.

Over the last ten years, the Swans have turned over 40 plus players and each year for the last five seasons at least one player has moved out and another player move in to the Leadership Group.

The structure of the AFL’s salary cap and draft system makes it difficult for teams to stay at the top of the ladder year after year, but through their famed ‘Bloods’ team culture the Swans have played in 17 out of 20 finals series since Leading Teams was appointed in 2003. They also went on to win the Premiership in 2005 and 2012, as well as play in the 2006 (losing by one point), 2014 and 2016 Grand Finals.

Sydney’s success was built around skillful drafting of players from other clubs and a rock-solid team culture, which remained incredibly consistent even when Roos ended his tenure as Head Coach and was replaced by John Longmire in 2011.

The Swans culture is not about words. It is about an ongoing commitment to improvement and a belief that seeking and giving feedback via open and honest dialogue around an agreed behavioural framework directly impacts performance.

The Swans make a very clear link between what they want to stand for, their game plan and accompanying KPIs. The success and longevity of the journey is a team and organisational responsibility – not that of a few individuals.

Michael O’Loughlin, former Swans player said, “The culture at the club is fantastic and it is the main reason why the team has been so successful. When players arrive at Sydney, either in the draft or as second-chance players from another club, they are inducted immediately and told in no uncertain terms what is required of them and that they are lucky to play for the Swans”.

Justin Peckett from Leading Teams, who took over the program from Ray McLean in 2017, said:

“The Swans have managed to maintain an extremely strong culture through player transitions and leadership change. The force of their culture hits you as soon as you walk through the door, you immediately feel like you have to step up. The entire playing group, not just the leaders, take responsibility for enforcing the team culture, and it’s this commitment that has led to their on-field success.”

For information about how we can help your team find its own secret to high performance, call us today on 03 9654 3744.