I’ve been a netballer for a long time.  I remember going to games to watch my mum play when I was a toddler and then I started playing when I was about seven.

Unlike my brother who sampled most sports as he was growing up – and was pretty good at most of them – I have always been a netballer; lived and breathed it, both as a player and coach for over 30 years.

At Leading Teams, we don’t play favourites or place any bias on the teams we work with, but I was particularly excited to be working with the Collingwood Magpies this year.  My excitement was a few fold; the first, my obvious love for the game.  The second aspect was the rise of women’s sport, which is finally getting the attention it deserves.  It seems netball has been plugging away at increased coverage for a number of years, so for it to finally happen – and involve a number of sports – is a great joy to witness.

When I looked at the people involved, though, there was something else I was excited about. I’ve been mates with the Magpies’ coach, Kristy Keppich-Birrell, for a number of years and knew her to be a very good coach who loves the Leading Teams model. And the playing list is an impressive one that has been widely publicised: Diamonds players everywhere, while captains of other clubs have come from far and wide to join this team.  They could win the Championship according to most, purely on the calibre of their list. 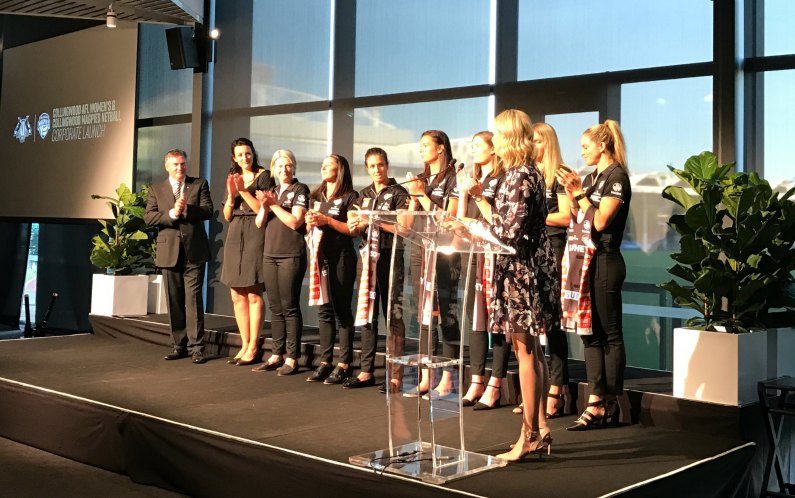 I knew Kristy wouldn’t be seduced by the media hype; her biggest concern is bringing the group of players together, she knows that talent alone won’t result in the trophy.

I first met the team at their preseason camp late last November. It was the first time they had all been together, players and staff.  One of the reasons Kristy is such a good operator is her focus on what Leading Teams calls the ‘dynamics’ of the team.  Sure, they had a schedule of fitness testing, skills and court time at that time of year – the ‘mechanics’ – but as crucial as that was the focus on building relationships, setting clear expectations and deciding what it means to be a Magpie (their team trademark).

Because the Diamonds of the group have also been exposed to our model – we’ve been working with Lisa and the team for five years – it made my job easier; they’d had a head start if you like.  I pushed them pretty hard that camp, really challenged what strong professional relationships looked like in the team and the benefits of building trust.  Their trademark took some tweaking, but mostly just in getting the language right, the team was very quickly aligned on the legacy they are trying to create.

One of the many reasons our work is successful in teams, is what happens after the facilitated sessions.  When a team fully embraces and takes ownership for the work we’ve done in structured sessions and applies it to their work environment straight away, you know you’re on the best path to high performance.

Before the Christmas break, we picked the leadership team and whilst the fear when you let the team decide is that the right person won’t be picked, Kristy and the players fully embraced the process of the open vote. The Magpies were clear on what they expected of each other which made voting easier.  Sure, they’re still getting to know each other, still learning how to challenge each other when things don’t go quite right, but in preseason, there isn’t too much that doesn’t go right – every team is performing well in preseason aren’t they?

A strong leadership group has been selected and they know exactly what is expected of them.  They were tested in preseason practice games, and the start to the season has continued to challenge the group but they remain focused and united as a team.

One of the most important aspects of our skills as facilitators is our storytelling, and I knew that because I had pushed the girls at their camp, I had to give a bit more of myself too.  I shared a story about my netball coaching experience that I often share with clients, but it meant a bit more with this team because it involved some of the girls.

I was identified as a coach with potential a number of years ago, so coached netball at a high level for my age and level of playing experience. At one stage, I had Sharni Layton and Shae Brown (nee Bolton) in my team and coached with the State team (in which Caitlin Thwaites was an up-and-coming star).  For a chunk of this time, I was also coaching alongside Kristy.

It was one of the toughest periods in my netball life, because I didn’t think I deserved to be there.  I had never played the sport at this level, and let the girls and their talent intimidate me so much, it no doubt had an impact on my coaching.  I remember Sundays spent planning training all day, stressed and confused, then throwing it out in frustration and starting again – I can only imagine what those sessions were like for the players, but I certainly didn’t enjoy them!  I recall being asked to give my opinion at half time huddles as an assistant and apprentice coach and retreating quickly because I didn’t think I could add any value. I eventually walked away from coaching and no doubt my lack of confidence was a contributing factor.

We know at Leading Teams that the truth you accept about yourself, your self-talk, will impact your behaviour / performance. The flow on of negative self-talk and its associated negative behaviours is that it’s seen by others, which influences how they see you (your self-image) and reinforces the negative cycle. So often, we see athletes who have done all the work and are physically prepared but lack the self-talk and belief to perform under pressure.  In this case, I was a good coach, but I just didn’t believe in myself. 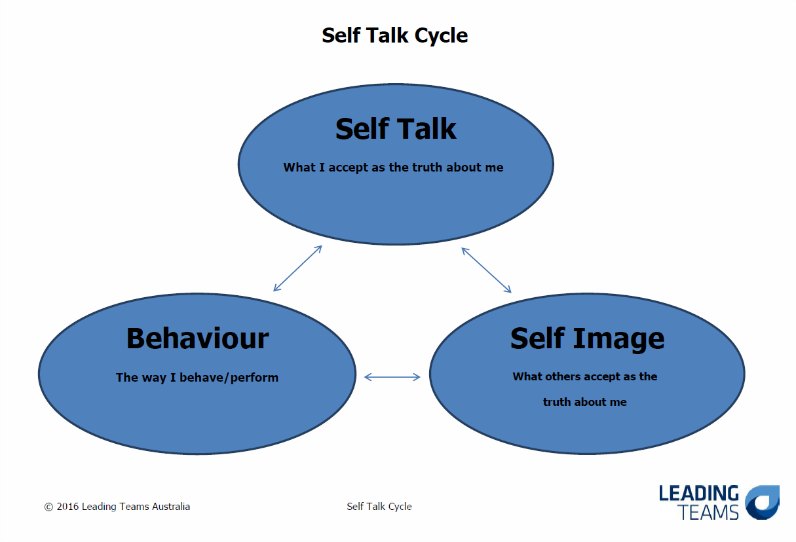 The self talk cycle

After a decent break, I went back to coaching in the last four years after being pestered by a good friend who I’ve known for years.  I knew some of these girls; I’d coached them at junior level or through school, so there were some nice reconnections.  The attitude I took into coaching that team was totally different after my previous experiences and learning.  The first thing we did was set some really clear expectations together.  I was really positive with them, wanted to share what I know, but also challenged them like they’ve never been challenged before.  They had always been successful, but we haven’t missed a finals series in the last four years.  When I finished up with them last year, some said they had learnt a lot about netball, but also about life.  Others thanked me for being the best coach they’ve had.

So, it’s great to see the progression, obvious commitment to success and reward for these players; both as athletes and as women.  But perhaps more so, it’s also been a worthwhile exercise for me to reflect on my own development as a person, coach and leader over the years; one of the many habits that working with Leading Teams has instilled in me.

Who knows how the Magpies will perform this season; I may be biased but I reckon they’ll do ok!

To find out how to bring your team together, get in touch today.