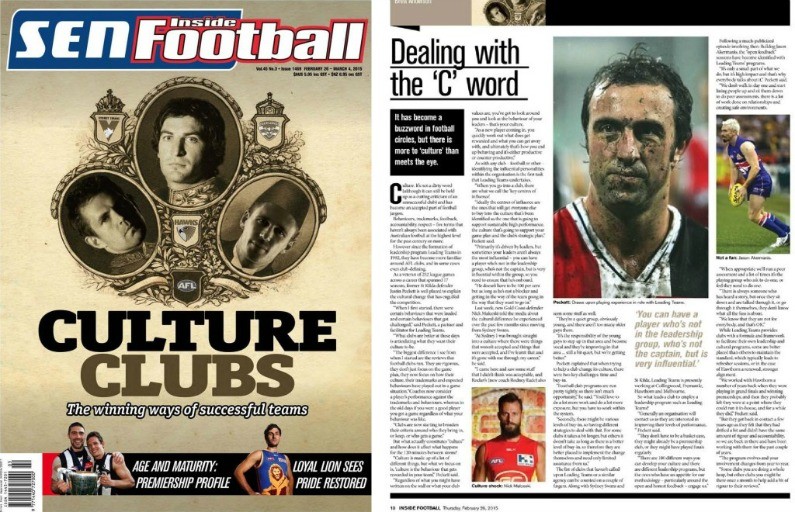 The cover story investigates how clubs such as the Sydney Swans, Hawthorn and Geelong have had sustained success in recent times. Leading Teams has run long-term Performance Improvement Programs with all three of these clubs (the Swans and Hawks are current clients).

It has become a buzzword in football circles, but there is more to ‘culture’ than meets the eye.
Culture. It’s not a dirty word although it can still be held up as a cutting criticism of an unsuccessful club) and has become an accepted part of football jargon.

Behaviours, trademarks, feedback, accountability, respect – five terms that haven’t always been associated with Australia football at the highest level for the past century or more.

However, since the formation of leadership program Leading Teams in 1992, they have become more familiar around AFL clubs, and in some cases even club-defining.

As a veteran of 252 league games across a career that spanned 17 seasons, former St Kilda defender Justin Peckett is well placed to explain the cultural change that has engulfed the competition.

“What clubs are better at these days is articulating what they want their culture to be.

“The biggest difference I see from when I first started are the reviews that football clubs run. They are rigorous, they don’t just focus on the game plan, they now focus on how their culture, their trademarks and expected behaviours have played out in a game situation. “Coaches now consider a player’s performance against the trademarks and behaviours, whereas in the old days if you were a good player you got a game regardless of what your behaviour was like.

“Clubs are now starting to broaden their criteria around who they bring in, or keep, or who gets a game.”

But what actually constitutes “culture” and how does it affect what happens for the 120 minutes between sirens?

“Culture is made up of a lot of different things but what we focus on is, ‘culture is the behaviour that gets rewarded in your team,’ Peckett said.

“Regardless of what your club values are, you’ve got to look around you and look at the behaviour of your leaders – that’s your culture.

“As a new player coming in, you quickly work out what does get rewarded and what you can get away with, and ultimately that’s how you end up behaving and it’s either productive or counter-productive.”

As with any club – football or other – identifying the influential personalities within the organisation is the first task that Leading Teams undertakes.

“When you go into a club, there are what we call the ‘key centres of influence’.

“Ideally the centres of influence are the ones that will get everyone else to buy into the culture that’s been identified as the one that is going to support your game plan and the club’s strategic plan,” Peckett said.

“Primarily it’s driven by leaders, but sometimes your leaders aren’t always the most influential – you can have a player who’s not in the leadership group, who’s not the captain, but is very influential within the group, so you need to ensure that he’s onboard.

“He doesn’t have to be 100 per cent but as long as he’s not a blocker and getting in the way of the team going in the way they want to go in.”

Last week, new Gold Coast defender Nick Malceski told the media about the cultural difference he experienced over the past few months since moving from Sydney Swans.

“At Sydney I was brought straight into a culture where there were things that weren’t accepted and things that were accepted, and I’ve learnt that and it’s gone with me through my career,” he said.

“I came here and saw some stuff that I didn’t think that was acceptable, Rocket’s (new coach Rodney Eade) also seen some stuff as well.
“They’re a quiet group, obviously young, and there aren’t too many older guys there.

It’s the responsibility of the young guys to step up in that area and become vocal and they’re improving in that area…still a bit quiet but we’re getting better.”
Peckett explained that when trying to help a club change its culture, there were two key challenges: time and buy-in.

“Football club programs are run pretty tightly, so there isn’t much opportunity,” he said. “You’d love to do a lot more work and do a lot more exposure, but you have to work within the system.

“Secondly, there might be various levels of buy-in, so having different strategies to deal with that. For some clubs, it takes a bit longer, but others it doesn’t take as long as there is a better level of buy-in, so therefore they are better placed to implement the change themselves and need only limited assistance from us.”

The list of clubs that haven’t called upon Leading Teams or a similar agency can be counted on a couple of fingers. Along with Sydney Swans and St Kilda, Leading Teams is presently working at Collingwood, Fremantle, Hawthorn and Melbourne.

So what leads a club to employ a leadership program such as Leading Teams?

“Generally an organisation will contact us as they are interested in improving their levels of performance,” Peckett said.

“They don’t have to be a basket case, they might already be a premiership club, or they might have played finals regularly.

“There are 100 different ways you can develop your culture and there are different leadership programs, but the ones who have an appetite for our methodology – particularly around the open and honest feedback – engage us.”

Following a much-publicised episode involving Jason Akermanis, the “open feedback” sessions have become identified with Leading Teams programs.
“It’s only a small part of what we do, but it’s high impact and that’s why everyone talks about it,” Peckett said.

“We don’t walk in day one and start lining people up and sit them down to do peer assessments, there is a lot of work done on relationships and creating safe environments.
“When appropriate we’ll run a peer assessment and a lot of times it’s the playing group who ask to do one, or feel they need to do one.

“There is always someone who has heard a story, but once they sit down and are talked through it, or go through it themselves, they don’t know what all the fuss is about.
“We know that they are not for everybody, and that’s OK.”

While Leading Teams provides clubs with a formula and framework to facilitate their own leadership and cultural programs, some are better placed than others to maintain the standard, which typically leads to refresher sessions, or in the case of Hawthorn a renewed, stronger alignment.

“We worked with Hawthorn a number of years back when they were playing in grand finals and winning premierships, and then they probably felt they were at a point where they could run it in-house, and for a while they did,” Peckett said.

“But they got back in contact a few years ago as they felt that they had drifted a bit and didn’t have the same amount of rigour and accountability, so we are back in there and have been working with them for the past couple of years.