One of the things that we’re most proud of at Leading Teams is that we don’t just preach our model to our clients, we live it in-house as well. Our behavioural framework – our team trademark, ‘Go the Extra Yard’ – is fundamental to our operation and everyone who joins Leading Teams is inducted into the trademark and the behaviours that underpin it.

Much as we advocate to our clients, we believe in challenging behaviours that do not live up to the agreed framework, but also in rewarding those that do.

With that in mind, in 2016 we instigated the Sally McLean Award, our internal recognition for the person that has best lived our trademark behaviours during the year. Named for Ray McLean’s late wife Sally, the award symbolises our commitment to our trademark by invoking the name of someone the team loved and respected as a great leader and a great team-mate.

In 2017, the Sally McLean Award was presented to Tim Ferguson. Tim was unanimously recognised for his support for the rest of the team, the way he challenges us to be better, the role he plays in our leadership group, and in particular the way in which he went above and beyond to help after our head office was flooded in July 2017. 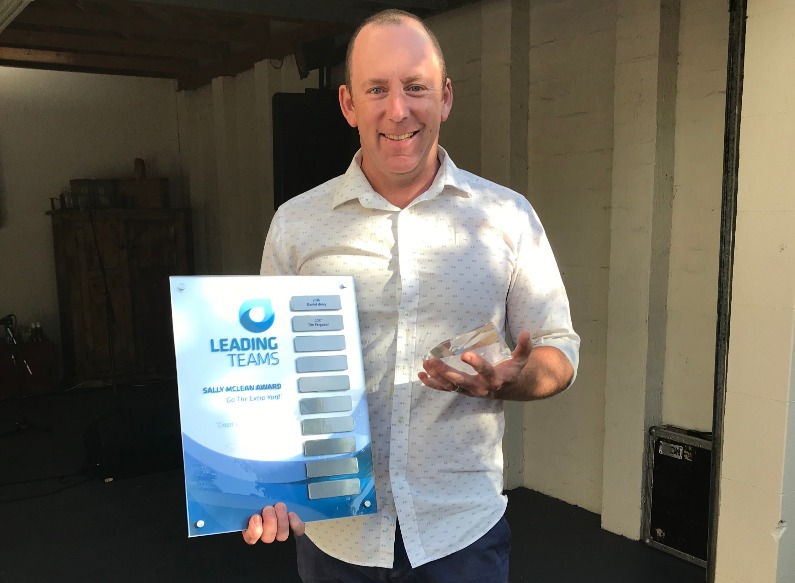 Tim with his award

Tim was given his award at our annual conference in December 2017 by Daniel Healy, last year’s winner. Daniel said, “It was so rewarding to be able to present Tim with the 2017 Sally McLean Award. He is an inspiration to all of us as he continually strives to make us a better team and organisation through his commitment to our trademark.”

Tim said, “It is a great honour to receive the Sally McLean award. Sally was an admired and respected leader to all who knew her. To receive an award that is voted on by my fellow team members at Leading Teams is incredibly meaningful and I am privileged to belong to such a great team.”

Our team trademark is more than just a list of values written on our wall, it is the very essence of Leading Teams. One of the reasons we believe so strongly in our model is that we see the proof that it works in our own team every day.

Avoiding the Fatal Flaws of Leadership Development Programs
Conflict Is Inevitable, So Focus On Making It Healthy