In his February 2017 article about Hawthorn Football Club selecting their leadership group, Leadership Selection: the Pivotal Link Between Culture and Performance, Ray McLean posed an interesting question: “Is it possible that we could put the same rigour and congruency around leadership selection in our corporate teams?”

To help answer that question, I’d like to put forward an example.

TAFE Queensland SkillsTech have been running our Performance Improvement program since early 2014. SkillsTech are one of six TAFE regions in Queensland. They focus on delivering trade training in the construction industry and they have over 600 employees, training over 20,000 students annually. They are wholly owned by the Queensland State Government and they are governed by similar systems and processes to other State Government statutory authorities.

In the early stages of the program, SkillsTech leaders developed a framework of agreed behaviours that would underpin their desired culture. Those behaviours are:

If you ever have the chance to visit SkillsTech you’ll see these four behaviours displayed around the four campuses, but more importantly, if you spend some time with SkillsTech people, you’ll hear them in their language, and you’ll see the team living them.

Could the same process of team members using these behaviours to elect their leaders, adopted by the Hawks in the AFL, work in this somewhat more bureaucratic environment? I believed it could.

One of the teams I work with at SkillsTech is the Acacia Ridge Carpentry teaching team. 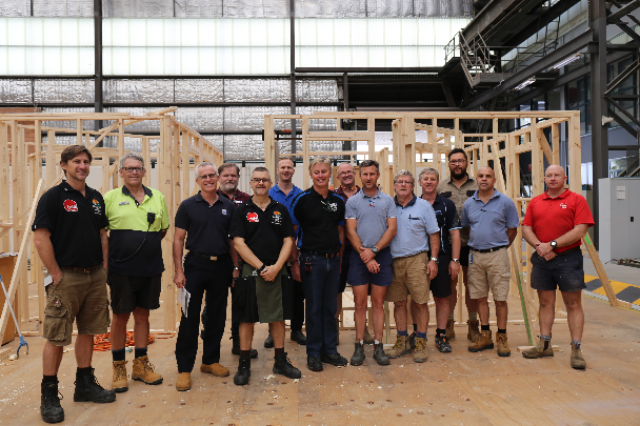 The Carpentry teachers have been using the agreed behaviours to review themselves as a team since they were introduced to them in January 2017. In June of this year they faced a test. Their leader, John Irwin, was due to take some long service leave and a new leader would have to take the reins in his absence.

The normal process in the TAFE environment would be to tap a leader at the same classification level from somewhere else in the Institute on the shoulder and ‘parachute’ them in to lead the team. I wondered whether we could try something that had never been done before – put the organisation chart aside and simply have the team select who they wanted to lead them. It works in elite sport so why not here?

John Irwin was a little nervous about the idea, but he quickly agreed.

“The decision to promote internal selection of a new leader was based on my confidence that the team was working well as a ‘self-managed team’. Their willingness to embrace the opportunity to choose their Acting Business Manager only reinforced my faith that I was making the correct decision.”

Now we needed John Tucker, then SkillsTech’s Director of Education and Training, on board. John has been a strong advocate and driver of our program and I was confident he would see the merit in the idea.

“It seemed obvious to me to support this as an idea when I was asked about it, after all what better way to unite the group and provide the new leader with the guaranteed backing of the team. You have to really wonder why most organisations don’t do this as a more regular feature of internal selection for leadership roles.”

With John’s approval we were ready to go. The selection process we chose was a simple one based on one of our key models, Competence and Character. The key technical skills (competence) were identified and put up on the whiteboard, along with Skillstech’s agreed behaviours (character). We split the team into pairs and allocated each pair six votes which they could allocate in any way they saw fit (ie. six votes to one person or 3-2-1 etc.).

The vote revealed four stand-outs: Mark, Bill, Michael and Matthew, with Mark securing the most points. There was just one speed bump – Mark wasn’t in the room! He was on Army reserve duty and away from work for the week. Did this influence the vote? Did it matter if it did? What if he didn’t want the job?

We discussed this and the team agreed that they would have voted as they did whether he was present or not. They also agreed that John Irwin, together with Bill, Michael and Matthew, would meet with Mark upon his return to discuss the selection and give Mark his feedback from the team.

They also agreed that should Mark decline the role, they had three willing leaders ready to step up.

They needn’t have worried.

“I have to admit it was a bit of a shock to even be considered. I had concerns about how some of the longer serving team members may be feeling about the decision and how this may create difficulties, but after being informed of how the selection process had unfolded, the reasons behind the process and also being reassured of support (in person) by many of the longer serving team members, I was willing take on the role.

“Having completed the role I would say that during that time, the Carpentry Team was actually led by the team. The selection process had identified not only a single leader for positional purposes, but had highlighted others that team members were willing to be influenced by when considering character, competence and leadership. When it came to delegation and decisions, this small group of people become a large part of the leadership team.”

What can other non-sporting environments learn from this?

There were several key take-aways from the exercise for me:

So, should the process of a team selecting its leaders be confined to the sporting field?

Hear TAFE Queensland SkillsTech talk about working with Leading Teams in their own words, below.

Is It Unrealistic to Think That a Leader Can Do Everything For a Team?
Former Newcastle Knights Assistant Coach Kurt Wrigley Joins Leading Teams in Sydney