At a recent Leading Teams training session for our newer facilitators, we undertook one of the activities we frequently run with clients: Broken Squares.

Broken Squares is a problem-solving activity first developed in 1973 by Dr Alex Bavelas. The aim of the exercise is to create five equally sized squares from numerous jumbled-up shapes. There is only one way to solve the puzzle completely but plenty of red herrings along the way.

You can’t talk to one another, and you can’t take pieces from each other. You can only use the pieces in front of you to try and construct a square, or you can pass those on to your team-mates. Gesturing, pulling faces and pointing are all expressly forbidden. 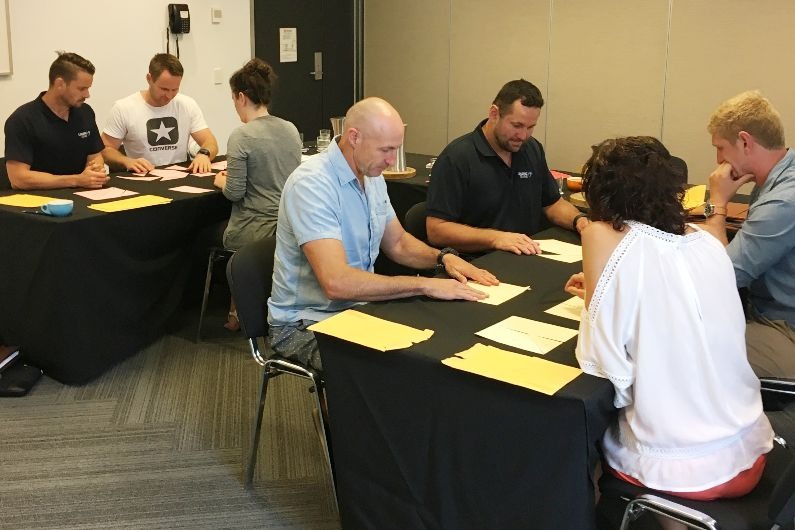 The two groups racing to solve the puzzle

So why do we do this exercise?

Well, there are a number of possible reasons our facilitators might use Broken Squares with a group.

As an ice breaker

Sometimes we work with groups who have little to no day-to-day contact with each other. While Broken Squares doesn’t allow for talking, it does set the scene that working together is going to be important. And once talking is permitted, every group likes to debrief their experiences and reflect on how they and their team behaved. It certainly opens the floor for discussion!

Some elements of what Leading Teams do are confronting for some. Giving and receiving feedback is a daunting task for many people. Exercises like Broken Squares reinforce the message in a physical and tangible way that most problems can’t be solved without some degree of co-operation. It also reminds the group of the importance of communication – and non-verbal communication in particular. Rolling your eyes, tutting or crossing your arms indicate frustration just as clearly as shouting it out loud.

To test your trademark

A bit later down the line, Broken Squares is a thorough way to test a team’s trademark behaviours under pressure. At Leading Teams one of our trademark behaviours is ‘find ways to collaborate’. So if our facilitator, Ray, had witnessed one of the team holding on to their Square and refusing to give up any pieces, even when it was clear that the remaining pieces couldn’t be used to make the required number of Squares, he’d be well within his rights to have questioned us for not challenging each other to live our values in a pressured situation. If your team has decided that patience is key to your success, and during Broken Squares half the team loses it entirely, is that trademark behaviour being lived in practice?

Experiential exercises like Broken Squares might seem light-hearted but the messages that come out of them are far from insignificant. It is harder to ignore an issue if you’ve witnessed it first hand in a controlled environment. The key is working out how to manage a similar situation should it arise in your day-to-day business.

The one thing that our facilitators will always stress with any exercise like Broken Squares is that it’s not the solution they’re interested in, it’s the behaviours and the discussions the activity prompts. Some of our experiential activities don’t even have solutions – they’re there as a conversation starter. Like many of our models, Broken Squares is designed to help participants start to embrace the idea of having genuine conversations to improve their performance.

For those that are interested, both groups successfully completed the task on our training day. But which one was quicker will remain a closely guarded secret!

For more information about how exercises like Broken Squares can help to improve your team’s performance, call us on 03 9654 3744 today to speak with one of our facilitators.

Helping SportsMed SA to Create a More United Team
Then and Now: Reflections on a Decade at Leading Teams