Choosing Your Own Leaders: How to Select Your New Executive Team 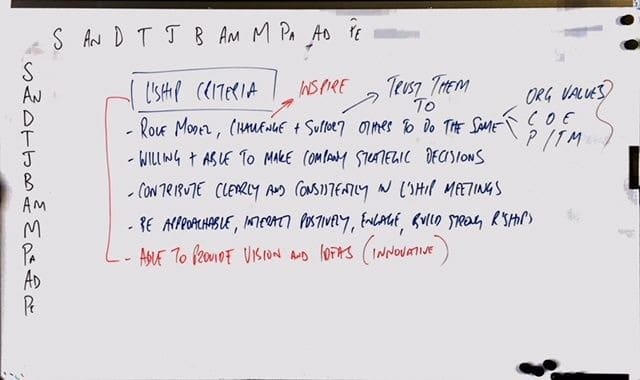 In 2017, Peter Brenchley, Managing Director of Plan B Group, decided to streamline his leadership team to create an elite group of high performing leaders to drive both performance improvement and the overall culture of the business. Leading Teams facilitator, Justin Peckett, helped him do that.

Here, Peter and Justin share their perspectives on the process.

All of our Leaders had improved their skills and at times been challenged – in a very positive way – by Justin to continue to analyse their style, values and behaviours.

And yet as we approached the end of 2017 I felt there was something missing.

My goal to create a group of high performing leaders, whilst relevant, was not quite reaching the benchmark I had hoped for as a collective. It was obvious that whilst we had seen improvement throughout the group, we had a core number of our team who were living our values and behaviours at another level again.

I discussed this with Justin and came to the conclusion that I wanted an ‘elite’ high performing leadership team. How to achieve this was now the core strategic decision.

It became clear that we needed to put the ultimate leadership assessment to the test and have the group vote on who was to be in our new leadership team. Whilst this was a daunting concept the excitement of having such a team had to be our goal.

Voting criteria were agreed by the leadership team and we used these criteria to decide which of our fellow leaders would receive our votes.  How many leaders were in the new group would be decided on once the votes had been cast.

On the morning of the vote it was important that we discussed the reasons and process behind this significant change; I presented the process Justin and I had been through to the group. There were many wry grins, some stunned faces and some blank ones too, however I sensed the importance of what we were trying to achieve had been recognised from the energy in the room.

We decided that the vote would be in the order of preference, with everyone casting a 5, 4, 3, 2, 1 series of votes.

It suddenly became very real and there was tension in the room; I could see that I had a group of people in front of me who wanted to be in this new leadership team.

The votes were cast. We read our votes out transparently in front of each other which I see as a sign of our leadership maturity. No secret ballots here!

After counting the votes and some direct feedback to each other over votes, non-votes, and even where you sat in certain people’s voting order we had a clear group of five – this was our new leadership team.

It was quite an exhaustive process as we all care about each other and wanted to ensure we did it right. Keeping us on track required the professional facilitation of Justin, who pulled it all together with his usual, no-nonsense style but also encouraged, demanded and cajoled the team to continue to use our values and behaviours to work through this process.

So why did we do this?

We wanted to have the best leadership team overseeing the strategic, resourcing and financial decisions of the business.

Why has this been good for the Plan B Group?

We identified those who were seen amongst their leadership peers as the very best leaders in our business.

Those who didn’t make the new leadership team have a leadership career path, support and motivation to strive to be in this new team knowing the responsibility it has within the business.

Our new leaders wanted to start this era with a new name to signal our arrival and we are now known as the Plan B Group Leadership Executive. However, we are very clear. It’s not our name that will make us a better company, it’s our implementation of our leadership values and behaviours.

In conclusion this process would not have been on our radar without the facilitation from Justin. Justin’s professional and motivating style in getting our group to look at ourselves whilst installing a real purpose to our leadership is undoubtedly the catalyst for our improvement and we are looking forward to continuing this work with Justin in 2018 and beyond.

As a facilitator at Leading Teams it is extremely rewarding to be able to play a small part in a client’s improvement. Plan B Group and their leaders have really stepped up in the drive towards creating and sustaining a high performance culture.

Rarely in the corporate space does a senior leader have the appetite to do what Peter and his leadership team have done.

We conduct open votes to select leaders with all our sporting clients within the AFL, NRL and at the Australian Diamonds, however very few corporate leaders are up to the ultimate challenge in empowering the people to ‘formally’ select who their senior leaders are.

This is ok; Plan B were not ready for it two years ago either, however they have continually challenged themselves and each other to improve their leadership and this was the next logical step.

As a result of the open vote, Plan B’s leadership team went from a team of 11 to just five leaders which is a significant change.

Given the integrity of the process, the levels of trust, respect and safety plus the committed follow up support plan, no one quit their jobs or were sacked. Yes, there were a few people that were stung and disappointed in not being selected however their response since, the way they are supporting the newly elected leaders, means that they are doing everything they can to behave their way back in to the Leadership Executive in the next vote.

For the open selection of a leadership team to work there are several critical success factors that Peter touches on above. I would like to reinforce these:

Could you team handle an open leadership selection? Start by asking yourself these questions:

Have you got the right people in your leadership team? What is the criteria to be a leader in your team / organisation? What would stop you from having an open vote to select the leadership team? Are you up to addressing any barriers to creating an open, honest, safe environment which empowers people to lead?